Just past the Autumnal Equinox.... some stencils to enjoy.
Photo/art: Joe Wasckerman in Seattle

Upper Haight (just one, from R$TR)

Photo: on the deAppropriation Wall, part of a memorial for René Yañez.

Robi the Dog (just one)

Photo: Detail of a large piece by Adey WCA
Music support: Einstein on the Beach (1979 viynl ed.)
Thanks: Esmeralda, D'Louie, Kasia, and Gerry

Here (LINK) are the rest of my photos of the stencils in the Parisian streets. Thanks to Esmeralda and D'Louie for a sharp second, sometimes third, set of eyes. Merci to Kasia for giving me and Esmeralda a great tour of the Belleville area and tipping me off to the street art cache in Butte Aux Cailles. If you visit Paris, take her tour.

Keep an eye out for the next Paris upload: the Artists of Paris. Coming Soon!

Fresh Uploads: All over, but not in Paris

But, wait! Banksy in Paris

>NEW< First ever stencil from Delaware… and it is corporate!

Just one from North Carolina (thanks, Karen)

Photo: Masked with a Continent, along the Canal Saint Martin

Stencil Archive is wandering the streets of Paris this Solstice week. We are posting our "best of" as soon as we can on social media (see links above) and then attempting to get batches of street work out soon after. Artist work will come a bit later this month (coming soon: Smile, Mimi the Clown, and Miss.Tic to name a few)

In Layers in DE

Let's take a walk in Oakland 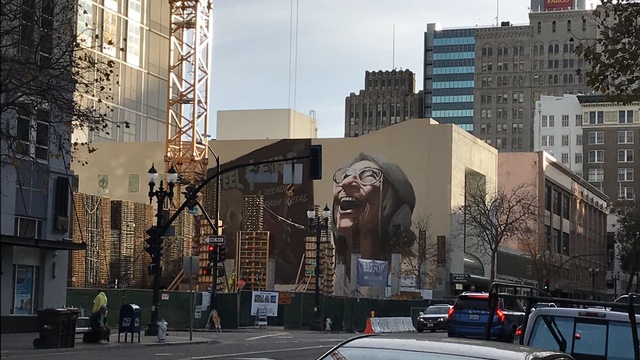 Late last year, a person who had taken both of my San Francisco tours, started asking me about taking him on an Oakland tour. He remembered that I had mentioned wanting to figure out an East Bay walk and politely called me out on the idea. While working my nonprofit day job on Broadway at 19th Street for a few years, I spent many lunch hours walking around Chinatown, Uptown, and Downtown, snapping stencil photos, annoying Jet Martinez while he painted his huge mural, stopping by galleries, and enjoying the tagging and graffiti. I would talk about the walks with my coworkers, who started asking me when I'd…

Thanks for your submissions: Josiah, Esmeralda, Ann, and the SFMOMA
<<< Calen Blake in NoPa/Western Addition

Wisconsin (just one, thanks Ann)