Goodfoot and Poboy art are proud to realease "The Pack: vol 1"  a collection of goodfoot artists.  The release will coincide with an art opening July 30th, from 5-11pm, the show will be up until Aug 25th. 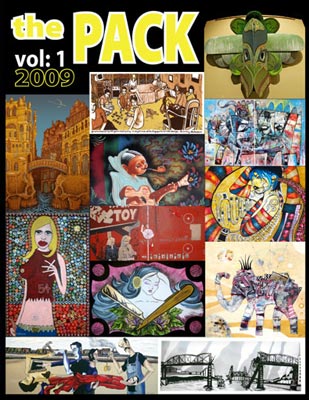 At the moment when Belgrade is facing a lack of exhibiting areas on one side and the development of alternative forms of expression through street art of the younger generations of artists, we believe that the Belgrade Summer Festival can serve as a platform for researching the potential of pictures in public areas.

The city's visual culture has aggressively been occupied by commercial messages and the initiative for painting murals should present a counter action with the goal of defending the city's visual identity, but also educating and expending the new potential audience for contemporary art. Mural as a technique has in many ways been neglected in the dominant course of contemporary Serbian art production, while in the smaller format it is noting progress within the street art…

Submitted by russell on Wed, 07/01/2009 - 09:09
This Summer is going to be quite busy with Festivals and Art Shows!
I've put together a list of the events that I will be at HERE.
I update the page as shows and events are finalized, so check back often!

Take Out the Trash

I had a wonderful  opportunity to work with the White Center CDA
during their annual Spring Clean. Hopefully people with be excited to take out the trash with a smile!
Read more on my blog

If you're in the White Center take a look around the neighborhood at all the colorful cans and see if you can find them all! Read more

This month I travel to upstate NY to do some painting on the outside of 518 Prints screen printing company. At their request I plan to re-visit some of the working class themes that inspired me to initially cut stencils back in the late ‘90’s. Check my blog, www.chrisstain.com for photos.

My good friend at Workhorse Visuals contacted me about doing an illustration for a GREEN DAY project based on lyrics from their new album, "21st Century Breakdown". I was given the song "East Jesus Nowhere" and asked to put something together based on the feelings I got from the lyrics. Recently I completed the piece for the limited edition release of the album. The work will be featured in a booklet that accompanies the cd…

Janet Attard Interviewed in Velosophie (AT)

Go here to download the PDF file of the magazine.

In Austrian with no other translation.

The UK Guardian has a great photo spread of Banksy's new exhibit, which is inside the Bristol City Museum.

Here's a review from the Telegraph UK.

Ad Hoc Art gallery has set up legal window murals in downtown Brooklyn which I will be participating in along with many others. An ambitious creative venture featuring an entire block of downtown Brooklyn consisting of 13 storefronts with 13 awnings/signs which will highlight installations by 13+ artists.

The opening will be a street party on Friday, June 19th, from 12 noon to 4pm.

One of Bristol's most famous graffiti murals, Banksy's Mild, Mild West in Stokes Croft, has been defaced.

A clean-up operation is underway on Monday after red paint was splattered across the giant piece of street art, one of Bristol-born Banksy's early works.

Shopkeepers, residents and workers in the area this morning said they were shocked by the vandalism to the 10-year-old mural, which shows a Teddy bear aiming a Molotov cocktail at riot police.

An organisation called Appropriate Media, an anti-graffiti group, has claimed responsibility for the vandalism and has called for the 'appropriate and…

DirtyPilot has a new book out covering graffiti, urban, and fine artists which features a special order through DirtyPilot.com where you can purchase a deluxe edition of the book along with your choice of a print (limited) from one of three artists.

(BOSTON) The Institute of Contemporary Art (ICA) and Boston Chapter of the AIGA, the professional association for design, present “Design as Social Agent,” a daylong event on Saturday, April 4 from 10 am to 5 pm. Bringing together speakers from the fields of design, street art, music and politics, the event frames Shepard Fairey’s work within the context of grassroots civic action, punk rock and 80’s graffiti and skate culture. A series of presentations, conversations and gallery talks will explore how concepts of appropriation, plagiarism, legality and process have been exploded.

Tickets for each of the five main stage talks are $25 or $15 for ICA and AIGA members as well as students and seniors. Ticket holders will have free access to additional programs, including gallery talks, and presentations in the Bank of American Art Lab on a first-come first-served basis. In addition, anyone who… Read more
Subscribe to Artist News