Now in our 20th year! Since 2002, your old-school website for all things stencils.

StencilArchive.org is a home for 1000s of photographs, videos, and more. This site has been DIY from day one. All donations directly pay the bills for hosting and updating this site.

Other ways to support this site (beyond submitting pics, videos, exhibit info, etc.):

fnnch in San Francisco (just one)

'Sistine Chapel of the ancients' rock art discovered in remote Amazon forest
Tens of thousands of ice age paintings across a cliff face shed light on people and animals from 12,500 years ago

One of the world’s largest collections of prehistoric rock art has been discovered in the Amazonian rainforest.

Hailed as “the Sistine Chapel of the ancients”, archaeologists have found tens of thousands of paintings of animals and humans created up to 12,500 years ago across cliff faces that stretch across nearly eight miles in Colombia.

Their date is based partly on their depictions of now-extinct ice age animals, such as the mastodon, a prehistoric relative of the elephant that hasn’t roamed South America for at least 12,000 years. There are also images of the palaeolama, an extinct camelid, as well as giant sloths and ice age horses.

These animals were all seen and painted by some of the very first humans ever to reach the Amazon. Their pictures give a glimpse into a lost, ancient civilisation. Such is the sheer scale of paintings that they will take generations to study.

The discovery was made last year, but has been kept secret until now as it was filmed for a major Channel 4 series to be screened in December: Jungle Mystery: Lost Kingdoms of the Amazon.

The site is in the Serranía de la Lindosa where, along with the Chiribiquete national park, other rock art had been found. The documentary’s presenter, Ella Al-Shamahi, an archaeologist and explorer, told the Observer: “The new site is so new, they haven’t even given it a name yet.” 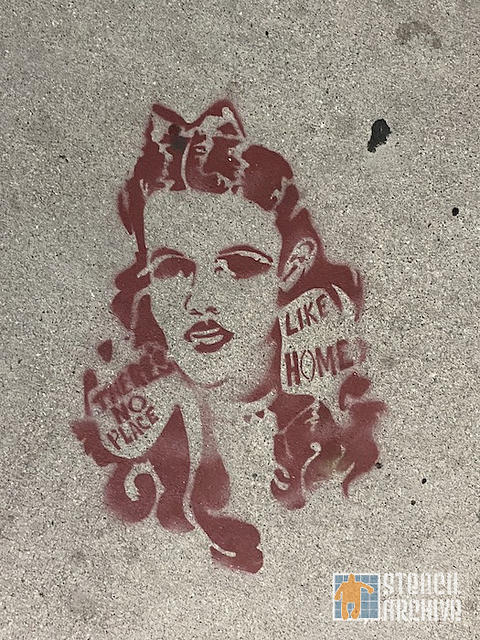 fnnch (including a colab with Jeremy Novy)

In the Western Addition, SF

On Valencia St., SF (just one)

In the Mission, SF (just one)

Oz in the Richmond, SF (just one)

In Golden Gate Park (just one)

In the Mission District

At the Ferry Building

At a protest (just one)

In Britain, a mysterious discovery has been made in the ruins of a church in an abandoned medieval village. On some stones, archaeologists have found graffiti and some enigmatic marking. It is believed that the markings were made to ward off evil spirits or witches. This discovery is a timely one as we approach Halloween.

Currently, there is a major infrastructure project being carried out in Stoke Mandeville, Buckinghamshire, England. It involves the construction of rail lines and a highway. This project will totally destroy a long-abandoned medieval village. ‘The deserted village site stands among fields half a mile south of today's Stoke Mandeville’, according to the Buckingham Archaeological Society . Archaeologists from Fusion JV are currently working to excavate as much of the village as they can.

Deserted medieval village
The focus of their work is on the ruins of the 12 th-century church of St Mary’s now little more than rubble. This was demolished many centuries ago, however, archaeologists were stunned to find beneath a heap of stones, the walls and floors of the place of worship. Andrew Harris, a manager with Fusion JV stated that ‘The levels of preservation of some of the features of the church are surprising given its age’ reports the HS2 Media Centre .

On the stones, of the demolished church they have found some graffiti. They have also discovered some curious markings. According to The Bucks Herald , ‘Two stones with a central drilled hole from which a series of lines radiate in a circle have been uncovered at the site of St Mary’s’. These engravings were of great interest to the team of archaeologists.

Witches marks or medieval graffiti?
One possibility was that the markings are medieval sundials that were used to tell the time and indicate the time for mass and prayers to the faithful. However, the engravings were found on a stone that was close to the ground. This would seem to indicate that they were not sundials.